In this episode, Nate Crystal, owner of Crystal Cabinets discusses with Dan his struggle with clinical depression, feelings of inferiority, trauma, self destruction, suicide attempts and isolation due to social idealism. Nate's personal understanding of social standards, like many of us, caused him to suppress his emotions in an attempt to fit in and alter his behavior to gain acceptance in his community. Nate's upbringing included religion in the Church of Jesus Christ of Latter-Day Saints, commonly called the "Mormon Church” with the military influence of his father who is a Veteran of the National Guard. Hear how he was able to confront his depression and learn to love himself. Nate shares his view of spirituality, personal growth and hope; where there is a choice, there is a way. His reliance on himself, his family, medical intervention and homeopathic Ketamine therapy helped him discover his full potential. 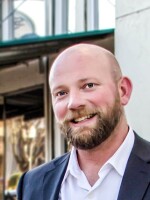 Dan Miller
Dan Miller is using his Military Veteran benefits to complete a graduate program at Idaho State University. Dan served gallantly as a Navy Hospital Corpsman in the Fleet Marine Forces. After his honorable discharge, Dan found himself redefined as a Veteran who battled with PTSD, alcoholism, substance abuse, and addiction. Dan found strength in Recovery, enjoys a life worth living, and is pursuing his MBA in Project Management.
See stories by Dan Miller