To follow up last week's episode on youth climate activism, I spoke to young activist Ellie Barron. Ellie is a freshman in college and has been organizing for almost four years with grassroots advocacy organization Action Corps. The organization champions justice and solidarity with people most affected by climate disasters and violent conflict. Action Corps has teams in about twenty states, and works by bringing together diverse actors and connecting grassroots advocates with NGOs, the media, and members of Congress.

Ellie was joined by Executive Director Isaac Evens-Frantz, who explained a particular campaign that the Action Corps Idaho team is working on that uses grassroots advocacy to address the global climate crisis. This campaign calls on Congress to support the release of international financial resources called Special Drawing Rights, which will help low income countries cope with both COVID 19 and the climate crisis. These resources are costles to the United States, and are supported by numerous religious organizations, non-profits, and economic institutions.

Listeners can support this campaign by writing to Idaho’s Senators, who are on important committees to getting these provisions passed. Visit http://actioncorps.org/covid-19. For updates on the Action Corps Idaho team, follow them on Twitter @ActionCorpsID 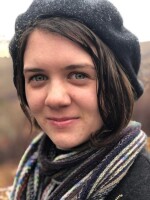