The Challenge of Mental Health for Student-Athletes: Finding a Balance between Commitments

Why do so many student-athletes report symptoms of anxiety and depression? This week on MindTap,
with the help of athletes, a coach and an Athletics Director, we investigate how student-athletes balance
their sporting and academic commitments for their mental health.

Student athletics is something that is very dear to me. I have competed in Track and Cross Country for two Universities within the NCAA system. Undoubtedly, being a student-athlete can be a rewarding and fulfilling experience, but it can also be difficult.  Student athletes face a unique set of challenges; they must balance full-time academic commitments with the demands of their sport. This is not just a physical stressor, but requires them to manage time, wrestle with their priorities and overcome an array of psychological stressors.

Joe Simmonds is a student of Chemistry at Idaho State University (ISU). He is also a mountain runner for Team USA and competes in Track and Cross Country for ISU. I spoke with Joe about stigmas that may exist surrounding conversations of mental health and wellbeing.

“There is definitely a stigma around mental health and being less than okay is not considered socially acceptable. We put a lot of emphasis on being physically healthy and being able to perform but we do not really recognize as well the mental and emotional demands that the sport can have.”

“Our first line of defense is still our coaches, athletics trainers, our team doctors, every one of us as staff members and even team mates to be more informed. I don’t worry that we can’t care for the students that we identify, I worry that students are not being identified or are not coming forward. The biggest part of the problem is all of that iceberg that is below the surface that we can’t see.”

This begs the question, why are student-athletes not coming forward and seeking help for their mental health? Pauline suggests that the student-athlete population may not be ready to talk about these issues because they worry that they are showing weakness or vulnerability if they do so. She wants to change this.

Alongside the Athletic Director, coaches are crucial in tackling student-athlete mental health. They represent the individual that athletes interact with on a daily basis and are often the first point of contact to report these types of challenges. Nate Houle, the Head Cross Country at ISU, spoke to me about athletes coming to him on topics of mental health.

“Within our purview (as coaches), we need to be able to have those personal discussions, not just you’re running fast or you’re running slow. Maybe we are somebody that they (athletes) can come to in these situations and not somebody they have never met over at counseling; it could be a good first step.”

Perhaps, the conflict between sports and mental wellbeing exists because sports teach us to be tough and gritty. Some may find it difficult to distinguish between the stressors that naturally exist within sport and those that transfer to our mental health. This line can be blurred, presenting a grey area, which may be an obstacle to de-stigmatizing such issues. I asked Coach Houle if he believed that this could be a problem for his athletes.

“We’re out there suffering, that’s what we do, that’s literally the name of the game. A lot of the time they (student-athletes) suffer in silence because that’s what we do (in sport) and therefore they carry that across to their personal lives where perhaps it should not be as well tolerated – maybe they need to speak up more about that. Life is not meant to be suffered through as much as the sport is - so they do a good job hiding that from me as a coach, but we have to talk about it if it’s becoming a problem.”

It was great to hear from both Pauline Thiros and Coach Houle on these issues. However, to delve a little deeper the Mind Tap team surveyed the Track and Field Team at ISU. One of the points we investigated was how many of the student-athletes experienced symptoms of anxiety or depression. Strikingly, we found that 82% of the men and 97% of the women reported symptoms on a weekly basis. One of the key findings of our survey, which is largely consistent with other similar published studies, was that a high percentage of women suffer with their mental health compared to men. I spoke to Rachel McGovern, a female student-athlete on the ISU Cross Country team about this finding. Rachel told me that this finding might be attributed to concerns of body image and weight.

“Running is weight dependent and there is this saying that one pound equals five extra seconds on your mile time. This can get stuck in a lot of girls’ head and if you have one girl on the team that is worried about body image this can cascade down and become a bit of an epidemic. There is also the issue of puberty when it comes to female sports, especially endurance sports such as running; there is a stigma that if you don’t get your period you will be faster and the best way to stop your period is to under-eat.”

It’s clear that student-athletes face an array of challenges. However, as we have heard, there are resources for students within athletics or in other places – such as counseling and testing. Although an issue exists, it is clear that starting conversations such as these can be a positive force for change. 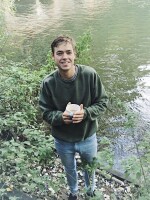